Well, it certainly feels a bit more autumnal now after that particularly mild end to October and the start of November ... the ringing demonstration was of course rained off, but a few of us hardy souls braved the elements and spent the better half of the day getting stuck in (not literally) to various bits and bobs up at Stithians. And although it started off wet (more low cloud and buffeting wind than actual rain for the most part), the day turned out nice, improving to bright sunshine even after midday.

Tasks for the day included attempting to drain the car parking area (it was in danger of becoming a lake in its own right), tidying and working on the access to the hides (strimming the footpath and moving leaf litter and soil) and more scrape work - clearing the willow scrub and lowering the soil level out in front of the Southern Hide.

I arrived nice and early, and took the time to check out the birds from the two hides whilst waiting for the others to arrive - rewarded with a nice Firecrest with two Goldcrest, just outside the Southern Hide. A good start to the day!

The four of us hardy souls, Greg, John, Beth and myself obviously had a great time, nothing better we'd rather be doing on a wet Saturday morning than getting wetter and muddier than a wet muddy thing (actually it was fine as we were mostly suitably attired). Tea break time and retiring to the feeder hide we were treated to a cameo performance from the Water Rail ('the' as in 'the same one as last year', perhaps?), with Coal Tit performing very nicely just outside the hide window, two Great Spotted Woodpeckers chasing around and (albeit a bit distant) a smart azure blue Kingfisher perched out in the middle. 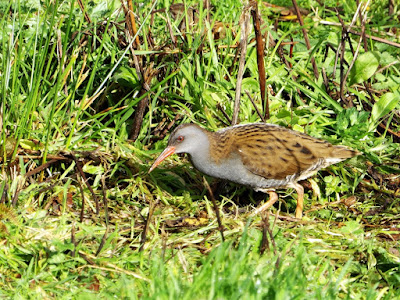 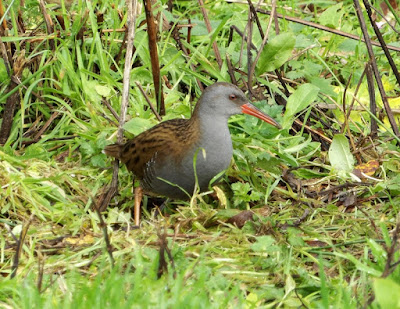 Water Rail - perhaps looking slightly out of habitat (although wet woodland a known haunt), but certainly not complaining!

Carrying on with the scrape attempt (there's a lot to be done unfortunately, but every little helps in this situation (oh for that mechanical digger!)), for an hour or two our numbers slowly dwindled until it was just myself and Beth putting in some brief kingfisher perching posts on the main reservoir side, and then it was just me (Beth going off to go running - total madness?!) - I'd put off cleaning and filling the feeders till last. The feeders were fairly full, but unfortunately the bottom half of each was a fairly solid mass of congealed seeds, fortunately not yet too obviously mouldy, result of all the recent rain. Took me a while to sort them out (had brought a water container of hot, now still nice and warm, water for the job fortunately). Was beginning to regret having left this to last and all on my lonesome when a Magpie calling lifted my head, and then me out of my reverie, as it came into view tailing an ethereal floaty white thing - a smart wide-eyed Barn Owl. I stayed stock still as it floated across the gap in front of the hide twenty feet or so away and then towards the causeway. Certainly made my day, just a shame the others had gone already. 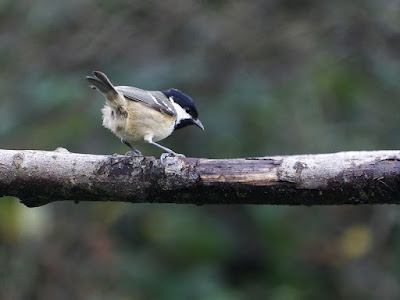 Coal Tit. On a branch. Get in!


A good haul in the end. A couple of Stithians year/season ticks in there too (eg caught up with Coal Tit eventually!), and some nice birds for the birthday too ;)

Thanks to all, after a bit of a break during the autumn, good to get down to some much needed work and maintenance again. 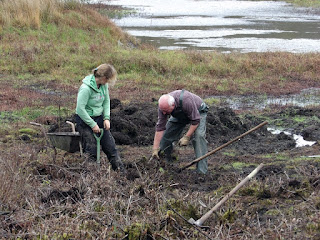 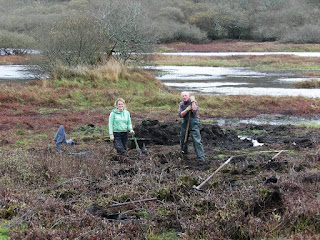 You tell them to work harder as you want to get some more action shots for the blog and they go and do this!!!

I had an unscheduled return first thing in the morning (well 10am) as I realised I'd left my coat in one of the hides! The weather seemed fairly dire driving in, but visibility was surprisingly good once ensconced inside. Even before entering the hide, and peering through the screen at the side I was treated to the aforementioned Water Rail, Coal Tit and Great Spotted Woodpeckers, this time also managing to count 10 Chaffinch at once.

The approach to the Stuart Hutchings Hide revealed 10 Snipe up and over the causeway in flight , and good numbers of Black-headed Gull again, with a Mediterranean Gull again - this one in lots of active flight though, dipping and swooping down to the surface. Fifty or so Fieldfare in flight over against the fields and woods were nice, and slightly bizarrely the same number of Redwing swirling in and down around the side of the hide briefly too. Ducks seemed in short supply, with only one Lapwing too, but then a small flock flew in from further up the reservoir - a dozen or so Mallard, with the two Shoveler, and a bit more special, the female Pintail that had been recorded in the week before. I left Daniel Eva in the hide, and carried on my way. 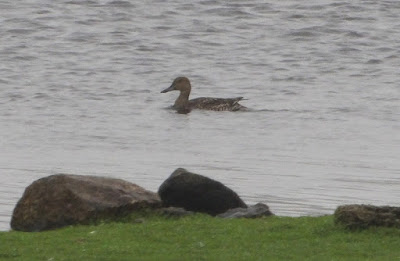 Pintail - photographic evidence it was there!